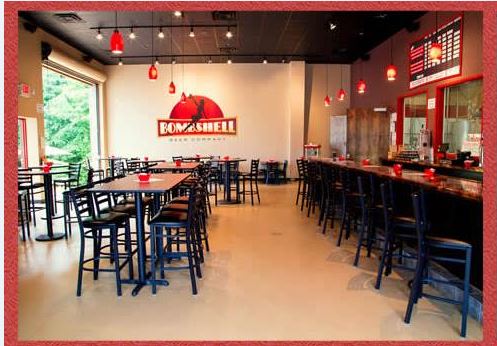 February 11, 2016  Post 0014.   The drive from Cary to Angier in North Carolina takes well less than an hour if you don’t stop at the seven craft breweries along the way.   If you have a designated driver or a will of steel you can visit them all in a day.   We took a couple of days so we could spend more time savoring their beers.   The range of size, location and styles isn’t all that unusual in the States these days, but there is almost nothing equivalent in Europe except possibly in Italy.

We could dwell on any of them, but one of the most distinctive was the Bombshell Brewery in Holly Springs.   It’s the only all women-owned brewery in North Carolina (hence a double meaning of “bombshell”) and the three women who run it aren’t shy about letting you know it’s theirs.  While the bombshell theme shows up in pictures and promotional items, there’s nothing about the place that would make either gender uncomfortable.  It sports an attractive copper bar and a half a dozen TVs for basketball …and the Super Bowl.   It is North Carolina, after all.

Their brewmaster Steve O’Neill migrated south after a very successful stint at Pittsburgh’s Church Brew Works because he was intrigued by the idea of working for women.   And by the lure of the opportunity to design his brewery from the ground up.  He brews a number of pleasantly drinkable beers that satisfy the sports crowd, but he’s been given enough of a free hand to come up with some very distinguished craft brews.   The Russian Imperial Stout featured a huge chocolate presence from start to finish—a result of complex malts and conditioning on French oak staves.   Enough roast malts and hops went along for the ride to make it balanced enough to appeal, but it was the chocolate that held center stage.

Further south, drive to the end of the route 70 limited-access to reach Smithfield / Wilson Corner and Double Barley, a nice big freestanding place out in the country.  Relatively cheap land prices results in many places are vast.  This one had a tidy, very woody little taproom and several nicely drinkable if conventional beers on tap.   One stood out from the rest – a gem we would have driven all the way there for even if it was the only beer they brewed.   The Double Black EyePA was an 8.3% powerhouse that blended a range of clean dark malts, coffee and chocolate remarkably well.  Its creamy smoothness might have been a bit much over time except for a long cleansing bitter that assured a dangerous more-ish call for another…or two.    You can blunt the impact of the IPA with a small but very well done menu of an exceptionally good Reuben as well as grilled cheese, local meats/cheeses plate, and an imaginative guacamole-salsa plate.