You are here: Home / Just Go / Hopping Around Fredericksburg.. with a visit to a Lake Wobegon Brewery 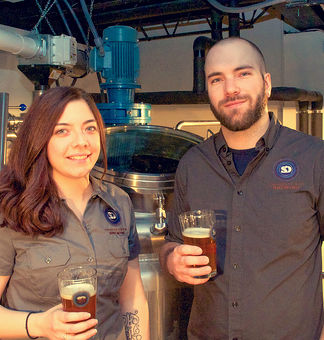 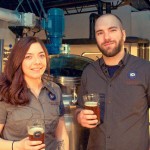 January 28, 2016  Post 0010.   We’re using Thursday posts for a while to chronicle first rate beer destinations in our metaphorical back yard.  There isn’t a section of the country that doesn’t sport breweries similar to the ones we celebrate here; we’ll hop farther afield as we’re able.   Today, we visit Fredericksburg, Virginia, home to several breweries, a fine beer bar, and a scenic old town to savor.   The breweries epitomize the new generation of start-ups, with a delightful range of experiences.

Book a room at the Marriott Courtyard smack in the middle of the town, only a couple of blocks away from Spencer Devon brewery and the Capitol Ale House.  It’s also an easy walk from the Amtrak station and you’ll hear the trains from your room.   It’s a new hotel on the somewhat historic site of the old Indian Queen Tavern, celebrated with pictures in the lobby.  The rooms are what you’d expect from Courtyard, which is comfortable, functional, and very clean.   The bar features Blue and Gray’s Fred Red, at least when the staff remembers to change the keg.  There are enough breakfast choices in the café to get you started in the morning and the staff is exceptionally friendly and accommodating.   There aren’t many choices downtown; it’s lucky this is a very good one.

You can start your evening at the new kid on the block – Maltese Brewing,  named for the Maltese Cross associated with firemen in the US and abroad.   Appropriately, a pair of firemen brew the beer and man the taps.  The welcome is warm and the beers are enjoyable.   It’s tiny, a small production brewery with a basic taproom that nonetheless draws a good crowd of locals.   With the possible exception of the entry level wheat beer (we know they have to brew something like this), we would have been content spending an evening with any of their beers.   They handle dark malts particularly well.  We have a cliché phrase “It’s hard to brew a bad stout” that we abbreviate to “HTB” in our notes.   But it isn’t all that easy to brew a good one either, and Maltese nailed the coffee stout we had that night.   A rich blend of coffee, near acrid dark malts and moderating ale yeast and hop fruitiness made it complex and more-ish.   It’s no session at 7% abv, but if you’ve got a designated driver or have cabbed out, you might want to stay with it all night.   We’re skeptical about many American saisons.   Some emulate DuPont effectively; Mad Fox uses the DuPont yeast, for example, in their very nice saison.   Frankly we weren’t looking forward to the Orange Cranberry Saison on offer at Maltese.   However, if you can block out concepts of style, it turned out to be a surprisingly good beer.   The cranberry was more of a condiment than a main course and the tart fruits balanced the malt quite well.   It’s more of a kind of funky fruity gold ale than a saison, but reminded us that it’s worth tasting a brewery’s entire range no matter what bias you’ve brought to the place.

Maltese is a type of pub that is surging in Europe and in the US, where a good many of the thousands of new breweries are similar mom and pop, father and son, or buddy and buddy breweries.   Some are still learning the ropes, but they’re the reason we have more breweries to choose from today than have ever brewed in the US.  From Courtyard in New Orleans, to Butcher’s Tears in Amsterdam, to Maltese and Growling Bear in Virginia, hardworking and gutsy no-longer-home brewers are making beer travel more fun than it’s ever been.

Spencer Devon is a much bigger operation, and sports an ambitious and highly successful restaurant.   The beers are as professional as the presentation of the food, and that is no easy accomplishment.   The place is, justifiably, packed; go for dinner without a reservation and be prepared to wait….for a seat at the bar.  The wait is worth it.  Brewers John and Mariah are sometimes at the bar, and occasionally hang out at Maltese – they’re neat people and worth meeting if you can.  Spencer Devon is also a frequent participant in beer festivals in Northern Virginia and has even made it to RFD tastings in DC.

Spence Devon is a “Lake Wobegon Brewery.”   We tasted eight of their beers when we were there (yes, they serve manageable portions) and every one of them ranked “above average” in our notes.   The Rye Porter and Milk Stout were very well crafted.   Of course…HTB.  The hoppy beers were exceptional.   Anyone with a Pocket of Hops can make a head-bashing double IPA, but creating enough balance to make the second round something to look forward to is a tougher task.   They change their Fall Line Pale Ale with the seasons, and we recommend you brave the snow to get some before the winter version melts away.  Huge hops, big malt; Ellie called it a “battle of monsters with the hops winning by a nose.”   I wish we had been able to stay for a rematch.   The Hush Hush Double IPA was what a Double IPA is supposed to be – hops in your face, but built on a strong and clean malt foundation.   The “ESB” was way out of style, quite deliberately, and showed how smooth a really hoppy beer can be in the hands of a skilled brewer.

We first encountered Spencer Devon before it opened – the owners, passing by and seeing us peering in the window, stopped to chat.  We were impressed with the enthusiasm that they brought to their project and we’ve been impressed with the care they’ve shown in making their dream a reality.  You can’t always predict the level of success for a start-up brewery, but in this case, we were pretty confident they were going to be a destination for us.   They have not disappointed.

The Blue and Gray Brewery brought craft beer to Fredericksburg and its flagships such as Fred Red sill appear on tap in the town.   While we were in town a couple of weeks ago, however, Adventure Brewing in nearby Stafford announced an agreement to take over Blue and Gray, so we expect to see some changes in the coming months.  For now Lee’s Retreat remains the outlet for Blue and Gray, but if you’re headed there you should check for hours and selection.    Lee’s Retreat is another drive or car ride from the center of town.

Finally, when you’re downtown, if you still have the legs for it, is the Fredericksburg Capitol Ale House.  Only a block from Spencer Devon, it was once the only reason to visit downtown.  It still sports a staggering number of taps from near and far, and they’ll feed you well for a beer bar.   Try the fries with multiple sauces.  The toughest part of the walk back to your hotel is crossing the street, and even for that you only have to look left.

We love the idea of being able to rail from anywhere in the Mid Atlantic to the center of Fredericksburg.   It feels like a European experience – except here we really can speak the language.