You are here: Home / Just Go / Hopping Around Europe: A European Answer to an Existential Question – A Brief Guide to Survival in a Brew Dog-Eat-Dog World.

Waiting anxiously for the Feb 4th post?   It will appear in the afternoon today.

February 1, 2016.  Post 1011.   The past 30 years have seen twin trends simultaneously operating in Europe:  new breweries and brew ventures growing like mushrooms and old traditional breweries dying like weeds.   In the US the process was cleaner.   In the 20th century our economy practiced brewericide and dropped the number of independent breweries from the thousands to a few dozen.   From the ashes, the craft beer phoenix has blessed us with more choice than we’ve ever had. 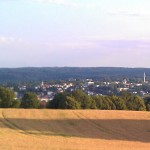 It’s a long uphill hike, but Anhofer’s beer– and the view– are worth it.

We’ve continued to wonder why so many breweries in Europe close at a time when so many new ventures are succeeding.   Some of the reasons are easily apparent.   Breweries in small towns struggle while flashy brewpubs in big cities thrive.   Small town brewers are sometimes slow to adjust to changing demand.   Small regional breweries that own a handful of taverns are tempting targets for bigger fish trying to build bigger market share and gain more economies of scale.   In Eastern Europe, small brewers who somehow managed to avoid collectivization under Communism never could produce products as clean and consistent as the big western conglomerates.   If their brew was palatable, they could survive.   Their only real competition was from large state owned breweries such as Żywiec, which is to say, not much competition at all.   In the 1990s Heineken bought a controlling interest in Żywiec and poured in millions of Zlotys upgrading the facility to make beer as cleanly nondescript as its western products. Once successful brews like Swejka Pilsener and Królewskie Mocne disappeared.* The same process was going on throughout the east.   Three of the independent breweries that encouraged us to include Leipzig as one of the top brewing cities in Europe were gone by the time we went to press.

Less morbidly, we’ve wondered why some breweries manage to buck the megamerger trend and continue to produce locally distinctive brews.   We think there may be some lessons here for the new wave of brewers who want to be relevant when their grandchildren start drinking.  On the other hand….if it were easy, everyone would brew it.

*For a fairly complete rundown of Polish breweries that have clung to life – and some who haven’t, see http://www.europeanbeerguide.net/polbrew.htm