You are here: Home / Beer Reviews / GORDON BIERSCH ROCKVILLE’S FESTBIER: SULTAN SWATS THE MODERN OKTOBERFEST STYLE OUT OF THE PARK! 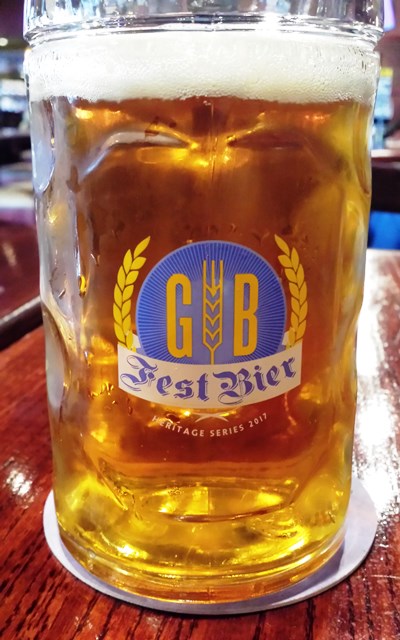 A disadvantage of teaching is that we’ve been to the actual Oktoberfest only once.   On the other hand we’ve had lots of summer days to explore local fests all over Germany.  I wish we had counted the Volk and Schutzen fests we’ve been to – it’s many dozens– and each one featured a local brewery’s fest bier.   Thirty years ago we encountered a good many fest biers that mimicked the dark Oktoberfest style, but many were lighter in color and less cloyingly sweet in a night of overindulgence.   We think some of those local gems might have influenced the “big six” of Munich to a more balanced approach to the beers served in their massive tents.

The beers of Munich’s Oktoberfest have shifted dramatically in the “light” direction – color and balance, though no lighter in body.  These lighter cleaner fest beers are sometimes hard to find in America.   We know of one major festival that sent back an entire shipment of genuine Oktoberfest bier because the organizers “knew” it was supposed to be darker.   The brewery resolved to never let the real stuff cross the Atlantic again, and we think, 25 years later, they haven’t. 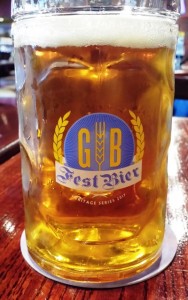 But you can get a remarkably authentic Oktoberfest beer that didn’t have to cross the pond.  Over a thousand American craft breweries (OK we really haven’t counted, but we’d bet money it’s over 2,000) brew a fest beer, and while some of them are under-aged attempts at the old style dark Märzen, others match the real deal better than many German-brewed  non-Munich copy cats.  We’ll feature Mad Fox’s Hitzig Frau before we leave this theme; tonight we’ll look at another Mid Atlantic marvel.

We’re writing this post at the Gordon Biersch in Rockville, Maryland.  Head Brewer Nassim Sultan had some big shoes to fill when he replaced Christian Layke who was moving on to start up his own brewery, and he’s filled them very well indeed.   We’ve featured some of his other winners in the past in this blog, but his Festbier this year is one of the best beers he’s done.

It’s a rich gold, like the beers you’d have gotten in the big tents if you had been there last week.  The 25 IBUs clean the sweetness beautifully and make it achingly moreish.   At 5.7%, it can get you in trouble over the course of an evening, but even there he’s got an edge – the beer in the tent in Munich is likely to be a deceptively dangerous 5.9.

Tasting notes:  Full body with enough sweetness to be authentic, but with a crisp Hersbrucker hop finish that suggested wild flowers when it was just out of the tank, but has settled into a soft floral beautiful balancing not-so-bitter that doesn’t just balance the malt, but embraces it.   Starts clean and stays clean with fresh malt and near-perfect hop balance even into subsequent half liters.  (The brewery is happy to serve you a full liter if you’d like.   The only thing that’s not authentic is that here they actually fill to the line; in Germany you’re lucky if you get two-thirds.)

Food Pairings:  Not a lot of variation here as we drink through the fest beers.   GB has a Jägerschnitzel that’s not nearly as authentic as Nassim’s beer, but the chicken schnitzel is quite well done.  The spätzle is authentically yummy, and you’d be lucky to get the mushrooms with it they serve here.   You can’t find a chicken schnitzel in Germany (they’re spit roasting all the birds), but turkey schnitzels are common – and just a notch below veal as a premium dish (pork schnitzels are for the workers—and schoolteachers).   [Beer Review # 0127    20171006]