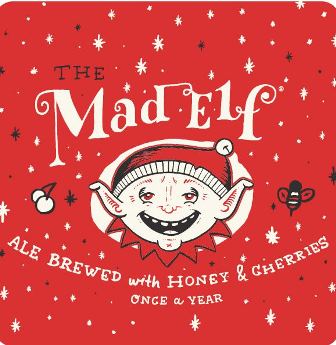 At Pub 27 in Pompeii

The Story—  This is an Ex Post Facto (sorry) entry for the fourth of our 12 beers of Christmas.   Find earlier posts with these links:  first, second, third,

A reason to be thankful to live in the Mid-Atlantic region is access to Tröegs’s whimsical yet brilliant brewery in Hershey, Pa.   There’s lots to do — drop off the (older) kids at Hershey Park just up the road and settle in for a fabulous tasting.  The brewery is designed for tours — the guided tour leads you safely through the heart of the brewery and the quicker and easier self-guided tour shows you many of the highlights while you sip on your beer.

Tröegs brews a wide range of beers that include one of the country’s best pilsners, but also range to remarkable powerhouses.   Mad Elf is an 11% spiced ale that fans eagerly await each year.  It can sell out quickly in the area near the brewery, but it’s not hard to find in good beers stores elsewhere in the Mid-Atlantic.  The brewery sells a wide range of their beers — including the Mad Elf– in their gift shop, but you can find them at lower prices in nearby super markets and distributors.

The recipe remains the same, but the beer still shows some variation – hops and malt do vary from year to year in much the same way that grapes can vary.  the brewery doesn’t make a big deal about vintages, but they’re clearly marked on the neck label — the release year is one year earlier than the “best before.”  I’ve enjoyed the Mad Elf more each year over the past half decade.  This year’s version is the best yet.   If my favorite beer of the year weren’t a Munich lager, I’d guess my palate is getting older and eager for excitement, but I suspect they really have found ways of nudging a very good beer into a great beer.

The Beer—   The 2018 version has magnificently blended rich malt. Cherries and honey can’t begin to be the cause of the breadth of flavors; the yeast suggests some traditional Christmas spices.  The fruit is so integral I had to recheck the label to see if it really was added rather than a natural result of the malt and hops.  In short it’s a masterpiece where the non traditional ingredients softly supplement rather than kneecap the depth of the malt and yeast.

Remarkably, the 2017 version was even better.   Redder, deeper and with more staying power, it was chewy, fruity and even slightly husky with some herbal notes developing.  Honey has stepped back a bit and the cherry notes are deeper.  We rate “ageability” on a 1 to 5 scale, where 3 doesn’t hurt, 4 shows some improvement and 5 is “don’t drink it, save it!”.   This one got a 4.5.  If you can get a six pack, drink some now, but definitely find a cool dark place to lay this down for a year or two.

Value —good to very good.   They know what they’ve got and don’t give it away, but it’s a special beer and worth the outlay.

It’s The Season!!   Through January 6th (Twelfth Night) we’ll give your this year’s list of the Twelve Beers of Christmas.  We’ve tasted close to 200 beers brewed for the season; they’re not all good elves, but a great many are as talented as Rudolph for getting us through a foggy winter’s night.

We know, we promised a count down to the New Year with descriptions of some of our favorite beers from the last five years.   In those years we’ve published Drinking in the Culture, and gotten a good start on a drinking/sleeping guide to the Mid Atlantic and a guide to great beers is supposed “bad beer cities” — the tourist meccas of Europe. But goodness, Grinch, what about all the holiday beers??  So we’ll detour and pick up the top ten list in the new year.

We’re often asked to share our tasting notes on over 33,000 beers; this blog is iour response to those requests.   Not all our notes, though.  The great beer writer Michael Jackson admirably followed the Thumper Rule, and we’ll try to do the same.  (“If you can’t say something nice, don’t say nuthin’ at all.”)   All the beers we post are from the top half of our ratings and most are from the top quarter.   Of greater value, we think, are the stories behind the beers,   and we try to give you enough about the brewery, the style and the places to find great beer to help you on your own beer journeys.   At CulturAle Press we try to write books and publish posts that will help you “Drink Well and Travel Safely.”