Ellie came up with a proposal for a black IPA almost 20 years ago, shortly before we heard that Greg Noonan was already making a very similar beer in Vermont.   She was told by more brewers than I can count that the bitterness of a dark roast added to the bitterness of hops would make a very unpleasant beer.  She claimed the floral and fruity flavors of the hops would enrich the roast and make the beer delicious. 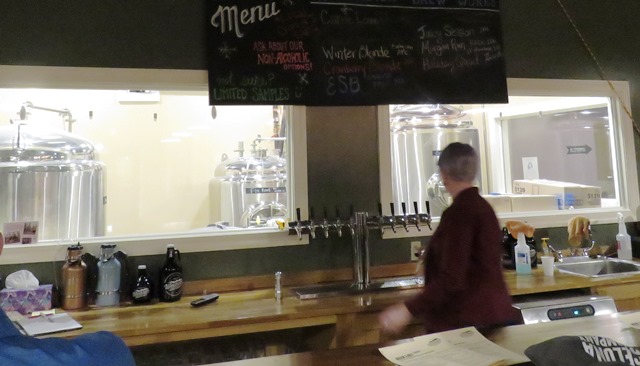 The Brew House at Winchester Brew Works gleams behind the bar.

She was, of course, right and the rest of us were dead wrong, but throwing a bunch of hops into dark ale doesn’t guarantee a transformative experience.   The hop blend matters and the roast has to be mild enough so that the bitterness stays under control.   Bonnie Landy, brewer at Winchester Brew Works, gets it right in Morgan Run.

Dark and creamy, with a bit of late ash, it gets as much fruit and spice from the hops as it does bitter. Chinook hops get along with the malt rather nicely.  Bonnie doubled down on the idea with a double dry hopped version that we think brought it to an even higher level.  The Amarillo hop gives more gentle citrus flavors than many of the palate smashers from the West Coast and we’ve been fond of it for years.  Here, it seems to accentuate the chocolate in the roast and contribute to a broader, really tasty, range of flavors.

Tasting notes:  The regular , if you can call it that, Morgan Run starts with a chewy dark malt that runs slightly husky in the finish where it’s soon joined by the fruit and the spice from the hops.   It stays dark and creamy and that touch of ash at the end is a welcome addition to the overall darkness.  It helps to know the Amarillo is there in the double dry hopped version, but like a hidden figure in a painting that becomes startlingly obvious once you see it, the tangerine fruitiness adds a wonderful breadth to the experience.   The foundational dark roast is unmistakable, but the chocolate notes are more vibrant the balance makes the beer undeniably moreish.

Food Pairings:  The depth and range of flavors in both versions would support a rich meat dish such as a Belgian carbonnade, but hold its own with something spicier as well.   If you want to avoid using a big sweet Belgian quad to complement a rich desert, this would provide a cleansing contrast.  Beer Review #0088    20170322