At least one “Juicy” beer seems to be a near requirement since Heddy Topper soared into cult status.   Winchester chose a session ale to get juicy and did it well.   It’s less dank than most of the New England versions but plenty fruity.   Some flavors are distinctive and not everyone is going to like it as much as I did – Ellie, for example, found it a good beer, but didn’t leave wishing, as I did, we had taken a growler with us.   At 5.4 it barely qualifies as a session beer, but it’s a session I’d love to join. 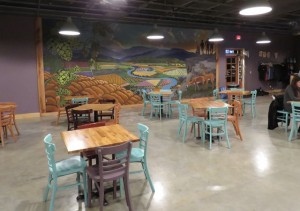 Tasting notes:   The malt is blond, very clean and smooth, and the hops are pungent and juicy.  Flavors of juicy fruit and tropical fruits show the hops.  Some of the flavor is close to what you’d have if you could get hops from a Pez dispenser.  (I always liked Pez.)   The end is dry, bitter with some resin, with a touch of cinnamon-like heat, and the spiciness increases as it drinks.

Food Pairings:  Session IPAs are wonderfully adaptable to a wide range of foods.   This would be a great choice for spicy Asian foods; the flavor won’t fade—ever–and you can drink plenty of it along with the spice.   But it’s also fine for burgers, steaks, and good old American ribs or chicken.  Review #0087 20170321