You are here: Home / Beer Reviews / SPATEN OKTOBERFEST – IN THE US, IT’S STILL THE “ORIGINAL” 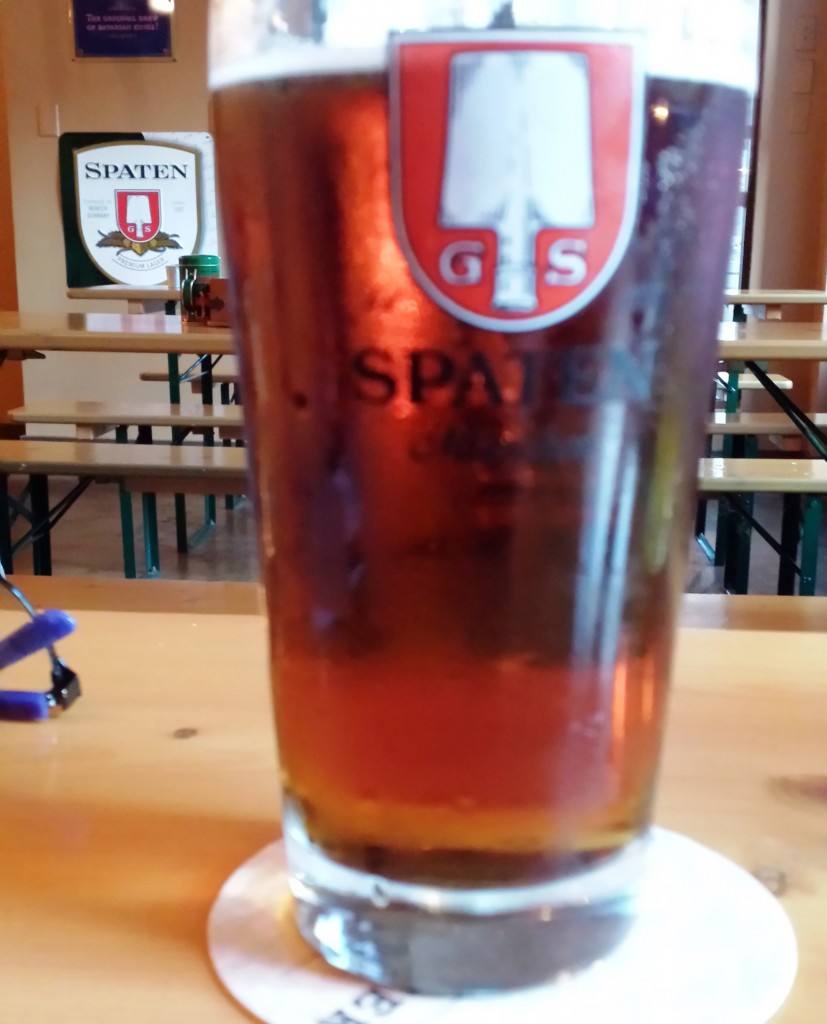 SPATEN OKTOBERFEST – IN THE US, IT’S STILL THE “ORIGINAL”

Many American visitors to Oktoberfest are shocked to find the beers a pale gold color – about that of a deep Helles and not that much darker than most pilsners.   In the US, Spaten, at least, avoids the culture shock and sends over a version of their original dark version of the style, sometimes labeled Ur- Märzen, “Ur” meaning original and “Märzen” referring to the original March fest beer.   The Märzen style originated because beer could not be successfully brewed in the warmer months, though ice caves allowed for it to be stored quite successfully. 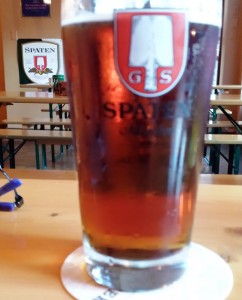 Spaten’s historic, rather than authentic, Oktoberfest at Tyber Bierhaus in Bethesda, Maryland.

The dark Märzen would have been expected in the 19th century when it became the dominant beer in Oktoberfest.   Spaten claims to have originated the style and the evidence seems to support the claim.   Spaten was one of the breweries that pioneered lager beers, and it had close connections to Vienna, where amber beers were emerging at the time.

Tastes change, though, and when we visited Oktoberfest in 1989 the dark version of the style was already on its last legs.   None of the tents featured it as the default festbier.  You could get it on request at only a couple of tents and from the wood—if you knew to beg—at Augustiner.   The modern Oktoberfest beer is still stronger than average – approaching 6.0, not far off from the low range of IPAs== and is matured for longer than the average beers, although that lagering period seems to be shrinking for some of them.

We don’t believe you can find the American import Spaten Oktoberfest, or anything like it, at any of the tents in today’s Oktoberfest.  Rather than authenticity, it’s best to focus on the fact that it’s a living historical relic, preserved by American demand for a beer that’s no longer served at the fair.

Tasting notes:  It’s a dark caramel amber, neither as dark not as sweet as most Munich dunkels, but not that far off either.   It starts with roast caramel, but a brace of noble hops almost creates a balance in the finish before the caramel takes back over into the aftertaste.   That kiss of hops, though, makes it just moreish enough to get through the first liter.   After that, at 5.9%, your judgment begins to cloud and your enthusiasm for your surroundings carries you through as many more liters as you….want.

Food Pairings:  Traditional Oktoberfest beer paired with Oktoberfest food for decades: spit roasted chicken dripping with the juices from the birds on the upper racks, Oxen rotating for hours on a huge spit—often just outside the tent for show, pretzels the size of a tricycle tire (the big one), and roasted mandeln (almonds) tossed in caramelized sugar and salt.  [Beer Review # 0126    20171002]

NEXT WE’LL CONTINUE OUR TASTES OF OKTOBERFEST