You are here: Home / Beer Reviews / Schwetzingen Hausbrauerei zum Ritter: Beer for Asparagus? Hefe’s not a half bad choice. 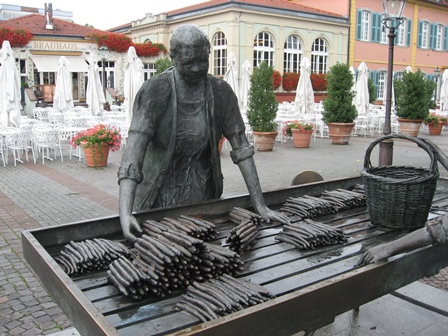 Coming later today — a tasty trip through the history of Guinness porters and stouts.

Schwetzingen Hausbrauerei zum Ritter:  Beer for Asparagus?  Hefe’s not a half bad choice.

Schwetzingen Hausbrauerei zum Ritter is an easy train trip from Frankfurt am Main, which is fortunate because Frankfurt remains one of the least interesting of any of Germany’s cities for beer.  The town of Schwetzingen is probably best known as a center of Spargelzeit – asparagus culture. 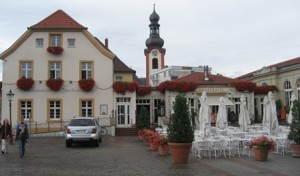 A cast statue of an asparagus vendor occupies a central place in the town square.  Just past it is the Hausbrauerei zum Ritter which has been providing food and drink to the locals since 1831.

Breweries pushing the 200 year mark have often altered appearances so much they’re hard to recognize, but a glance at one of the original photos of the place shows the main building essentially unchanged.   Inside, the shining copper kettles show that it’s been refurbished and brought into the 21st century.   Schwetzingen is a good beer drinker’s town with several brewery taps.   It’s one of dozens that didn’t quite make the cut in Drinking In the Culture. 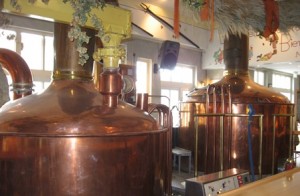 We’ve been reviewing German style Hefe-Weizen beers lately and while we’re on that role, we honor the very good example of the style from Ritter.   Ritter brews good Helles and Schwarz beers, but their best is Ritter Weizen.   The esters are evident but subtle, with a spritzy almost peppery spice more than clove.   Banana is very restrained and overshadowed by a Juicy Fruit- Honeysuckle sweetness that’s a component of some German pilsners.  A clean chalk feel emanates from a tasty and restrained yeast. 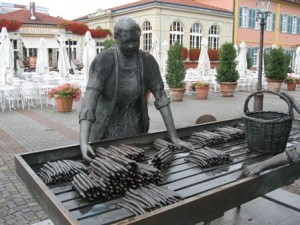 A tribute to the asparagus vendors that make Schwetzingen famous. The Schwetzingen Hausbrauerei zum Ritter shows in the background.

We missed asparagus season when we visited and I hope we’ll get back to it.   We think that a good German Hefeweizen would be an excellent pairing for asparagus, however, and we’re waiting for spring—the asparagus will be a great deal fresher than the German weisse, but we’re still looking forward to it.