You are here: Home / Hopping Around / How Could We Have Left This Pub Out of the Book?!? 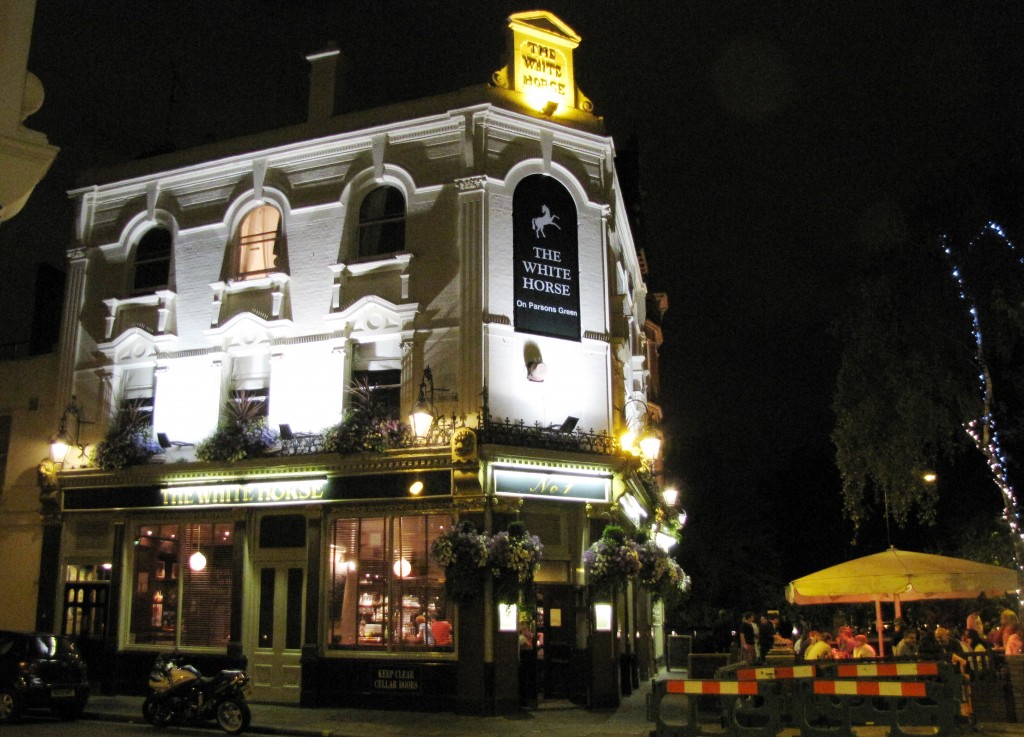 February 15, 2016 Post 0015.  Travelers who know us well have no qualms about berating us for omitting their favorite watering hole.  One response is that some of our favorite pubs didn’t make the cut either.   In London, our decision to restrict recommendations to the center area required us to ignore many nearby icons.   The White Horse in Parsons Green is such an icon.

A coaching inn has stood on the spot since the 17th century; the current pub is somewhat younger, but still nicely atmospheric. We first encountered it 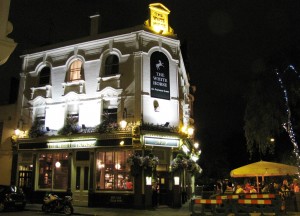 when we were invited to join a group of brewers in town for the Great British Beer Festival in the mid-1990s.   There weren’t nearly so many places in London to find a wide range of beers at that time and the White Horse had established itself as one of the premier free houses in the Greater London area.

“Greater London”—Ah, there’s the rub. London is truly great in almost every sense of the word but unchallengeably great in geographical scope.  An expedition from downtown London to the White Horse requires a Tube journey using three separate lines and can take just under an hour depending on what 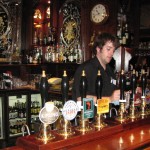 part of the city you’re leaving from.   But if you have more than a couple of days in London, it’s worth the effort.  Parsons Green is a neat area to explore – the White Horse isn’t the only pub there, but it is the reason to go.

It features a wide range of beers—both cask and craft draft.   The atmosphere is welcoming and the food is good.   Recently it has featured more and more foreign beers.  Seeing a Czech Staropremen tap isn’t much of a surprise, but it did startle us to see 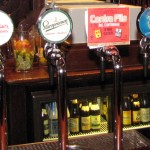 beside it a tap for Hop Devil IPA from Victory Brewing in Downingtown, Pennsylvania.  The bottom line: if your interest is mainly in British beers while you’re drinking in London, you’re better off spending time in the multi-taps we recommend in the six “small crawls” we feature in our book.   But if you want a break and a chance to taste a range of lagers and ales from other great brewing countries, you can spend a very pleasant afternoon or evening in Parsons Green.