You are here: Home / Beer Reviews / Hofbrau’s Original Lager: First Rate Helles on Both Sides of the Pond

Hofbrau’s Original Lager: First Rate Helles on Both Sides of the Pond

.           We think the Hofbräu beers in Munich are underrated.  Hofbräu beers have more hops and better balance than most of the others.  They’re still malty and clean, but they embrace us from the first mass in a way that few other German Helles beers do.  This summer we ran into a friend who is a well-known brewer at a fairly large regional US brewery and one of our points of conversation was that the Hofbräu beers didn’t get the respect they deserved either by the people of Munich or the beer community in general.

Pitttsburg’s Original seems breadier than that brewed in Munich, but it’s very authentically Bavarian.  We’ve run into beers even more bready in Feising and further south of Munich.   A crisp finish shows Hofbräu’s relatively generous hops – some floral notes, metal and a late bitter don’t find their way into the taste of other Munich beers.   That hop tang helps it drink remarkably clean. 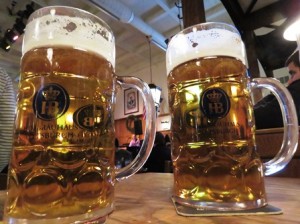 Beer comes in plastic liters after 9PM, but unlike Germany, you get a full liter of beer.

Maybe the great test of a great helles is to see if the second liter of it at 8 o’clock in the morning is as good as the first.   The Munich version definitely was (see our post on the Kocherball) and we think the Pittsburgh version might be as well.  As far as we know, the Pittsburgh site hasn’t hosted a Kocherball, but given their enthusiasm for rousing partying, perhaps someday they will.

See out featured “Just Go” post this week for much more on Pittsburgh’s Hofbrauhaus.