Some of the beers we feature are those that have blown us away with their depth and range of flavor.   Others make the cut because in this land of over 5,000 breweries anyone who does anything drinkable that isn’t very similar to 20 other beers within 20 miles gets a tip of the hat.   The Bowditch APA is in the latter category.  In fairness, though, I liked it a lot.  Ellie, not so much, so although our average score doesn’t put this to the top of the pack there will be plenty of drinkers like me who will find this a very enjoyable, almost-session beer.   It’s very rare these days to find a beer that is very distinctive-  maybe even approaching unique—that doesn’t involve so much acid that you need to make sure your health insurance is paid up.  Our kudos to Escutcheon for brewing a good beer that still breaks new ground. 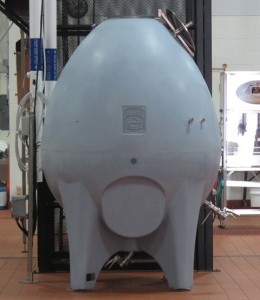 The nearly unique touch here is the concrete “blue egg” that the brewery uses to ferment some of its beers.   It seems to be the “marvelous toy” of brewing—at least when we were at the brewery no one could tell us exactly what it was or what it did…but they all liked it.   Our sample was to limited to be definitive, but it seemed to soften the edges of the flavors, perhaps at the price of increasing some buttery diacetyl   For more about the brewery, read our “hopping around” post on Winchester breweries.

Tasting notes:  Some malt in the aroma includes a bit of biscuit and a touch of butter along with a touch of demerara-like sugar.   The sweetness and the diacetyl (buttery flavor) carry into the initial taste, but some floral notes clean it up a bit before the end.  Still, the egg seems to contain most of the declared 40 IBUs and there’s a persistent butterscotch pudding sweetness.  That’s not necessarily a bad thing in ales.  We suspect this beer could be very popular in central Pennsylvania where beers tend to be much more sweet than hoppy.

Food Pairings:  We’d lean to “contrast” rather than “complement” with these round soft sweet flavors.   The heat of chicken wings or hot Asian foods could be soothed by the softness for the same reasons that milk is the beverage of choice for those eating “on a dare” hot foods.    Beer Review # 0089    20170324