There are almost as many ways of including coffee in beers as there are beers that include coffee.  In the early days of coffee beers, many of the brewers we talked to were adding ground beans to the mash and essentially brewing beer and coffee at the same time.   Lately, we’ve noticed a trend towards cold-brewed coffee infusions.   The latter approach requires some calculations since the alcoholic strength of the beer can be diluted.   Escutcheon solved that problem by ramping up the abv from the start. 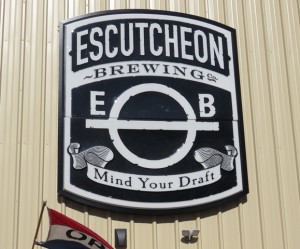 The Escutcheon logo is the Plimsoll Line mark that, placed on the hull of a ship, prevented over-loading and saved thousands of lives.

The brewery presents a succinct and clear description of the intent of this beer on their website:  “When steel is annealed, it is heated up and then cooled slowly to relieve locked-up stresses. Similarly, this variant of our famous stout has been heated up with a higher ABV and then slowly cold-infused with locally-roasted, ethically-sourced coffee beans from Winchester, VA’s own Hopscotch Coffee.”

Tasting notes:  The coffee is huge in the aroma, but finishes with more sweetness than I expected.  As it drinks, notes of chocolate and lactose step forward to make it a fuller and richer brew.   It was sweeter than we would have designed it, but there are many beer drinkers out there who like more sweetness than we do and they deserve to have their beers.

Food Pairings:  Breakfast.   Bacon and eggs and, if you want to really take the sweetness to another level, a good Danish on the side.   At 6.5% your breakfast pint will ensure a quick return to bed for that nap you’ve been promising yourself.   Beer Review # 0090    20170325

WE USALLY TAKE SUNDAY OFF, BUT WE’LL POST ESCUTCHEON’S CHEERLY KRIEK TOMORROW AND LET IT STAND ON MONDAY.  IT’S BOTH RARE AND VERY EXPENSIVE.