You are here: Home / Beer Reviews / A NEW MORE DEPENDABLE BEER OF THE DAY COMING SOON 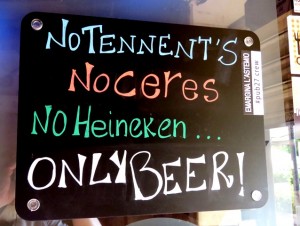 sign at Pub 27 in Pompeii — one of Italy’s most enjoyable beer bars.

Coming September 1 (yes- 2018):  A new sleek version of the Beer of the Day that actually will be a “Beer of the Day”.   We taste and take notes on enough beers to sustain a daily BoD, but don’t have the time to find and edit and post the pictures.

So– starting in September we’ll start a new simplified post of a different beer each day with no frills and standard graphics.   Many will be beers we have discovered in our travels to research our upcoming book:  “Brews & Snooze: A Guid

e to Drinking and Sleeping in the Mid Atlantic Area”  It features breweries from which you can walk back and get a comfortable night’s sleep without starting your car.  Others are from our next European book project – a guide to very good beer where you don’t expect it (Rome, Madrid, Paris, and even Pompeii!)